A dedicated yoga studio in the heart of Falmouth

Today I turned 40. This is crazy since I’m clearly only 32. However, as listed on my birth certificate, 1st October 1974 was the day when my then 16 year old super Mum and my 16 year old hippie Dad realised what happens when you don’t use contraception.

To celebrate I decided to take myself and Cyclone Frank away for a week of doing nothing to one of my favourite places on earth, Black Sheep Farm in Nimbin. My 40th birthday is currently being celebrated in the bush, surrounded by mountains touching the sky and kangaroos pounding the earth.

As I drove here and Frank slept, I was looking at the magnificence of Mt Warning and remembering all the other times I have made this journey. I first visited BSF in 2005 a year after arriving in Australia aged 30. Over the past decade I have probably visited at least a dozen times. I got engaged here (since married then divorced), I’ve hosted six women’s only yoga retreats here, I’ve come for a solo escape, i’ve brought friends and family here and even spent one Christmas. It seems so right that Frank and I are spending my 40th here before I return home to the UK for a year or two.

A decade spent in another country. And what a decade it has been. If I look back at it like it’s a 90 minute movie (hopefully I would be played by Lori Petty as I just always wanted to be her in Point Break), it would be a tumultuous art-house type affair that ends with a beginning.

Let’s see. Engaged, married in New York, separated a year later, the next year spent trying to rescue the doomed marriage, the year after finally admitting it had gone to Hades. A passionate affair with a man ten years my junior, an escape to India, a smorgasbord of unsuitable micro relationships via internet dating, travel, drama, tears, friendships growing every stronger, others drifting away and a man with an interesting tattoo who made my heart skip. We fight passionately, we laugh loudly, we made a baby. A year of parenting (see previous blog entry) and BOOM 40.

My 30s feel like they were the years of deciphering the code of Keren Louise Cooksey. Not soul searching so much as learning about my faults, my strengths, my desires, what drives me and developing a sense of self awareness that allows me to acknowledge when I’m acting like a bitch and do something about it.

This past decade had a fair bit of drama in it. I hope I’ve left that behind. I really feel like the decade ahead of me is a new age. Change is in the air with my move to the UK, with being a parent, with being in a relationship that I don’t run out on when things get a bit tough and there are new beginnings happening with my teaching and writing so overall I feel excited.

I also feel so lucky to have experienced so much in my four decades of life. I have had adventures across the globe and I’ve had many wild adventures of the heart. The good times have been bloody amazing and the bad times have honestly taught me so much. I say this without cliche. I’m not saying heartbreak didn’t hurt and loss didn’t drown me in sorrow. I’m saying that I feel truly blessed to have led the life I’ve had including all the crap times. As the crap times cleared the way for a new me and a new phase.

And so I step into this next decade with a lot of hope and a whole lot more strength and courage than I had under my belt at 30. When I turn 50, I hope I look back on the last decade with pride, happiness and a sense of achievement. Plus I hope I laugh raucously (at) myself through the next ten years no matter what happens. 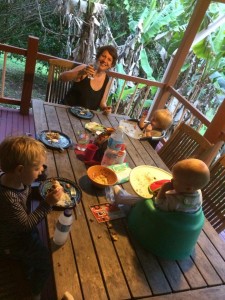 All the latest Falmouth Yoga Space news and events, straight to your inbox.