Taking your life in your hands – April Blog by Jo

Where would we be without our hands?

I still remember the night that, as a child, I awoke from a seemingly interminable and inescapable nightmare to find my mother at my bedside gently stroking my hair as I slept. Surfacing to that sensation instantly transformed my terror into a feeling of being completely protected, safe and cared for.

From the creation of our built environment to the intention communicated directly through touch, our hands possess incredible powers that we mostly take for granted. Yet they are our greatest tools.

With our hands we give and receive. They are conduits of interaction, passing from one to another, whether it’s a passing of the salt or of a sentiment from one heart to another. As the parts of ourselves that we can make distant – our most distal limbs –  they have the power to protect by bringing close or by holding at arm’s length. The very gestures of our hands carry enormous power as well as personal and cultural significance.

Contrast the earlier example of a mother’s comforting touch with any situation you may have encountered where touch has been rough or threatening, or a gesture that has signified ill intent such as a clenched fist or raised middle finger. It’s likely you will respond with a tensing up, a hardening of the body from softness to rigidity, perhaps accompanied by a sense of shock or fear.

Given that hands have the ability to channel so much of our power and energy and thereby evoke a very real response in our bodies and nervous systems, it’s no surprise that there is a branch of yoga devoted to them – mudras.

Mudras – yoga in our hands

Mudras are ‘locks’ or ‘seals’ that are created by intentionally placing the hands in a certain way (mudras can also involve the eyes, the face or the whole body, but for this post I will just focus on hand mudras).

If you’ve ever had one of those yoga practices where you can feel your energy extending out beyond the physical edges of your body (I’ve only had this in a 4pm practice when I haven’t eaten for the whole day, which I don’t necessarily recommend) then imagine the effect of sealing those exit points, eg. the fingers, so that all of that prana, energy, life force is locked in and redirected in a specific way back into the body. That’s how I like to think of mudras.

Most cultures have health systems that include the significance of the hands. In Chinese medicine each of the fingers is an exit point for the energy channels or meridians of the body. Therefore what you do with each of those fingers in a mudra will correspond to an effect on a particular element and organ, much the same as in reflexology.

One of the most common mudras, chin mudra, is a perfect example of how the meaning of a hand gesture can be cross cultural. In this mudra the tips of the index finger and thumb touch to create a circle while the remaining three fingers stretch away and the hand rests with the palm turned up.

As a yogic mudra, the thumb and index finger signify the union of the individual self and the universal consciousness, creating an unending continuation from one into the other in the form of a circle. It’s purpose is to connect us with our higher self and it’s practice is an expression and intention for this desire.

In the West, a simple rotation of the wrist so that the thumb and index finger are closest to us and the three fingers point straight up creates the hand gesture that signifies that all is well, that everything is in alignment.

Another example is abhaya mudra – the cosmic ‘stop’ sign – performed with a firm, flat hand with all the fingers and the thumb straight and close together. In yoga this is a symbol of strength and protection, which can be found in the discipline and refuge of our practice. In the West when we hold this gesture with the palm facing outward and away from us, this is an unequivocal ‘halt’, an assertion of boundaries that aren’t to be messed with. With this mudra in particular the intention informs the practice and vice versa – a soft hand will not carry the same power and message as a strong one, nor will it create the same energy in the body. 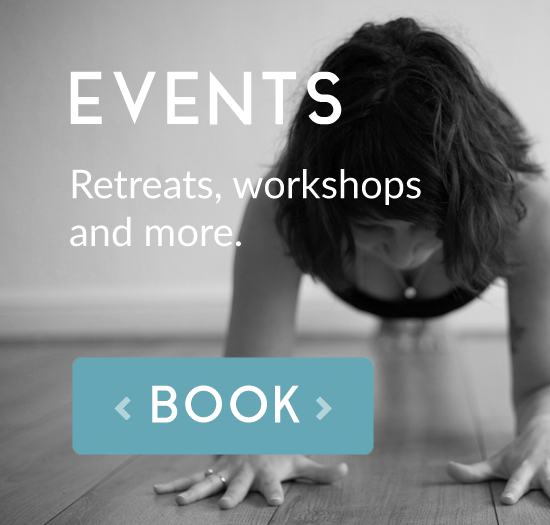